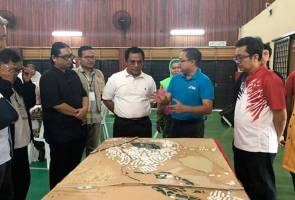 UTM have been working with many stakeholders to inject “science” into the CBDRM program organized by government agencies, private and volunteers.

In 2017, flash floods and landslides left several stretches of roads in Kundang area with badly damaged infrastructure and properties. More than 6,000 people were affected by the disaster. In achieving a culture of resilience, more actors and players, e.g. government agencies, private sector, NGOs and scientists are encouraged to come together to play and contribute in this form of engagement.

Therefore, this CBDRM Program was co-developed by various stakeholders in a spherical and dynamic manner. This program engaged more than 100 participants from 10 villages in the vicinity of Mukim Kundang.

UTM Geohazards laid forth their expertise on science and technology to quantify local risk, root-causes, triggering- and causal factors for assessing hazard, vulnerability and risk including the community preparedness at the stage of before, during and after disasters.

“The villagers would be taught to understand the nature of disasters and the importance of community involvement. It’s about teaching people at the grassroots level to handle potential disasters,” said by Mohamad Fazli Sardi, PhD researcher at UTM RAZAK Faculty of Technology and Informatics who lead the study on community readiness, disaster preparedness and resilient assessment.

He was also assessed the implementation, quality and impact of the event. It leads to the formation of community-led planning and action for preparing next floods in the near future.

CBDRM Kundang was a latest collection to the high impact community-based DRR programs implemented by UTM Geohazards in vulnerable regions such as Sabah earthquake in 2015, flood in Rantau Panjang, Kelantan in 2016, landslide in Serendah Selangor in 2017, tsunami triggered by earthquake in Kota Kuala Muda, Kedah in 2018, and geological hazards in Kundasang in February 2019.

UTM Geohazards has built momentum for collaboration among various actors at the national and local levels.

Together with many strategic partners, we co-implement evidence-based local actions, advocacy campaigns at the local level and in developing partnerships and coalitions for resilience. We demonstrated the inclusion of expert- and local knowledge and capacities in policies, plans, and actions, which help to build resilience of communities at various levels.

In the latest report on ASEAN Risk Monitor and Disaster Management Review (ARMOR) published by ASEAN Coordinating Centre for Humanitarian Assistance on Disaster Management (AHA Centre) in March 2019 indicated Malaysia has the highest percentage (67%) of population exposed to floods amongst ASEAN member states, in which ASEAN was largely affected by floods (57%) in the period of July 2012-January 2019.

With 23% GDP contribution to Malaysia, Selangor should be ready to face future disaster. CBDRM Kundang was one of success stories in exploring local champions and designing community-led programs for strengthening their resilience and preparing for future risk.

Indeed, UTM scientists had made significant contribution to the local stakeholders and vulnerable communities by promoting science into practice and translating words into action, as in line with the Sendai Framework for Disaster Risk Reduction 2015-2030.

** The views and opinions expressed in this article are those of the author(s) and do not necessarily reflect the position of Astro AWANI.