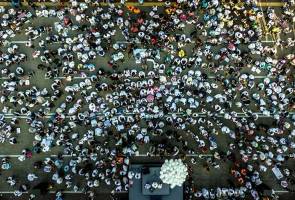 I SCRAMBLED to get my gear to cover the “Perhimpunan Solidariti Kedamaian” ready as I got the confirmation that it was going through. The “Perhimpunan Solidariti Kedamaian” was organised by Minister in the Prime Minister’s Department Datuk Seri Dr Mujahid Yusof Rawa, as a show of solidarity with the people of New Zealand in wake of the tragic massacre the claimed the lives of 50 muslims in Christchurch, New Zealand.

At 7am, I had actually reached the steps of SOGO. The crowd grew bigger and bigger as many arrived clad in white; the colour of the rally. There was a clear indication by Datuk Seri Mujahid that the rally was “free for all” and that it was a gathering of peace and harmony regardless of religious or political background.

The crowd was rich and diverse. Most noticeable in the crowd were the few dressed in religious garbs. Leaders of various religious groups attended the rally too, to show solidarity and support including Datuk Seri Dr Zulkifli Mohamad Al-Bakri, mufti of the Federal Territories. A clear sense of a harmony was in the air.

Also present were relatives of Muhammad Haziq Mohd Tarmizi, a 17-year-old Malaysian who lost his life in the tragedy.

As the last of the VIPs arrived at SOGO, there was sharp call for the attendees to start lining up on Jalan TAR. The crowd slowly started to form the lines with the VIPs took the front of the lines, to lead the procession.

The marchers chanted as the procession slowly made its way to Dataran Merdeka. The ministers, and religious heads took turns to speak and to convey their sympathy and support.

A clear message was sent that day, that the Government and Malaysians shall not stand and tolerate extremism and that there will be no room for intolerance and the oppression of minorities, and the use of religious and racial sentiments for political gain.

Another highlight was the reading of the 2019 KL Peace Declaration, by Datuk Seri Mujahid, which declares the opposition of Malaysians to any form of hate and violence.

“Total rejection of any act or culture based on hatred in the name of religion or ethnicity,” he said when reading out the declaration.

“We will defend the sovereignty of our country from being destroyed by agents of racial and religious hatred.”

The rally was a beautiful act of solidarity with the people of New Zealand and Muslims all around the world. The rally showed that in an act fueled by hate and right-wing extremism, love and tolerance prevailed.

And will always prevail.

As I sat down going through my work for the day, I couldn’t help but notice that my memory card contained photos from my coverage from the two previous rallies that had taken place in the capital.

On the 8th of December, was the Anti-ICERD rally, organised by UMMAH and Seketariat Kedaulatnan Negara, which was joined by UMNO and PAS. This was a rally that was initially set out to protest the efforts of the government and Minister P. Waythamoorthy’s attempt to ratify the International Convention on the Elimination of All Forms of Racial Discrimination (ICERD).

Thousands thronged the capital. Looking back at the pictures, I could clearly recall the vibe of the day. One contrasting that of the Perhimpunan Solidarity Kedamaian. Flags, banners and chants based on the rhetoric of “Malay Suupremacy” filled the streets of Kuala Lumpur on that day.

The Government had already back-tracked on their decision to ratify the UN convention after major protests by opposition lawmakers and conservatives groups. UMNO President Datuk Seri Ahmad Zahid Hamidi even said that the Malays would run “amok” if the UN convention is ratified.

Despite the back-tracking by the Govt, the Anti-ICERD rally still went on but instead to “celebrate” the failure of the Government.

Many felt that the backtracking was a step back for Malaysian Civil Rights movements.

Fast forward to early March, a mere two weeks prior to the Perhimpunan Solidarity Kedamaian, KL’s streets played host to the Women’s March.

“Hentikan Keganasan, Hormati Perempuan” was the theme of the march.

The spotlight however fell on the members of the LGBT community that attended the rally in solidarity with the women’s rights movements. Backlash was met by the the rally-goers and organisers as conservatives and conservative groups lambasted the event for being an event to “promote” LGBT “activities”.

Datuk Seri Mujahid added fuel to the fire when he claimed that the march “violated” and/or “misused” the democratic space to defend things that are “wrong in Islam”. On March 14th, the police announced that the organisers are under the probe for sedition and for violating the Peaceful Assembly Act.

Only one rally was met with severe backlash. That which was in alignment with the Perhimpunan Solidarity Kedamaian.

In this new Malaysia, everyone has the right and should be given a voice and a platform to voice their concerns and opinions. However, why has there been unequal treatment?

As I stood in front of the Tun Abdul Samad building, at almost the same spot where I listened to PAS and UMNO leaders preach conservative views, I listened to Pakatan Harapan leaders preach on more progressive ones. The same leaders that had condemned and subjugated the women’s rights march to police investigations and the Sedition Act.

When you preach for tolerance and protection of the rights of minorities, how can such injustice be allowed to happen?

Regardless of religion/race/nationality, there should be no place in this world for hatred and for intolerance.

“If we cannot end now our differences, at least we can help make the world safe for diversity. For, in the final analysis, our most basic common link is that we all inhabit this small planet. We all breathe the same air. We all cherish our children’s future. And we are all mortal.” – John F. Kennedy

* Alan Razak is an Advocate and Solicitor of the High Court of Malaya.

** The views expressed here are strictly of the author’s and do not necessarily reflect Astro AWANI’s.