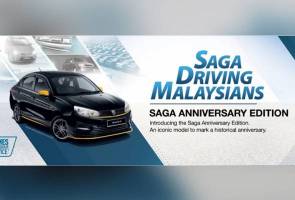 KUALA LUMPUR: Proton Holdings Bhd held its first-ever virtual launch over the social media, the Saga Anniversary Edition, in conjunction with the 35th anniversary of the Proton Saga.

Unveiled as part of the celebrations, the Saga Anniversary Edition commemorates and celebrates the first Proton Saga delivered in 1985.

The carmaker said only 1,100 units are available of the limited Proton Saga edition which come exclusively in black with yellow highlights on both the exterior and interior priced at RM39,300, the same as the current Saga Premium AT after the zero sales tax rebate.

“The Proton Saga is the car that put Malaysia and therefore our economy on wheels and it is still doing so,” said Proton chairman Datuk Seri Syed Faisal Albar in a statement today.

“It is our way of saying thank you for supporting the Saga for the past 35 years. Plus, you can order it today by visiting our showrooms or booking it online,” he said.

Over the past 35 years, the company has been a catalyst of industrialisation for the national economy, spurring the development of an entire automotive ecosystem making Malaysia one of the few countries in the world to produce its own vehicles.

END_OF_DOCUMENT_TOKEN_TO_BE_REPLACED

Facebook Twitter Email Pinterest linkedin WhatsApp WhatsApp
KUALA LUMPUR: Around 1.8 million units of Proton Saga cars have been sold in the last 35 years in the count...